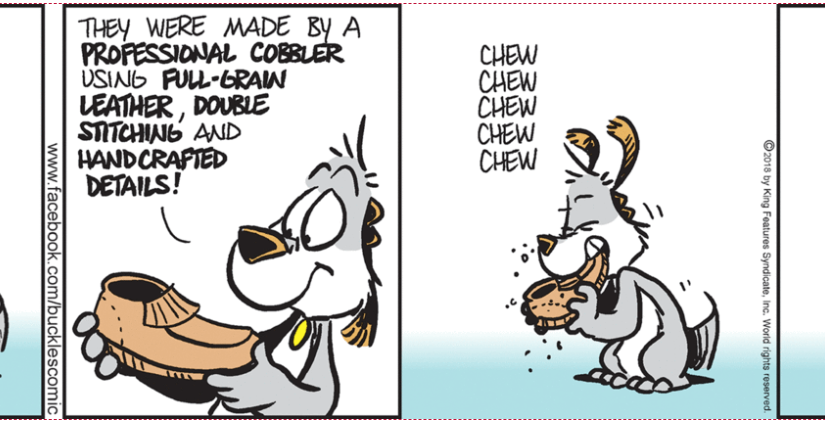 English, being light on inflections, uses word order a lot. Classical Greek, for example, is heavily inflected, so word order can be played with more than it can be played with in English. They even have a figure of speech called chiasmus, in which they arrange the words symmetrically in the sentence (for example, noun, adjective, adverb, verb, adverb, adjective, noun) and you use the inflections to figure out what refers to what.

Sometimes getting the word order correct in English can be tricky. I have mentioned where “only” should go several times. (Search for “only” in the search box in the upper right corner to see some examples.)

So this Buckles comic, first panel, gets it wrong, at least in expository writing. Perhaps we’re more relaxed in conversational speech.

The rule is that adjectives go right before the word they modify, so technically, the dog is saying that it’s Paul’s good pair, not good shoes.

Not a lot of difference there; it could go either way, and you might even make the excuse that “pair of shoes” counts as one word. Well, maybe.

But when you’re explaining something, be on the lookout for ambiguity, and avoid it.