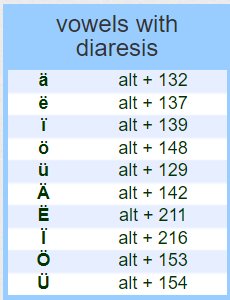 First, Pearls Before Swine will illustrate:

We don’t call it an umlaut in English, either. We call it a dieresis. The dieresis serves a different function than an umlaut does, too.

The umlaut changes the pronunciation of a letter. For example, you pronounce Ü and ü by shaping your lips to say “ooo” but shape your tongue to say “eee.”

The dieresis changes a diphthong (two vowels pronounced as one) into two separate vowel sounds. For example, coop (think chicken coop) changes to coe-op when you spell it “coöp” (think co-operative). And “naive” technically would be pronounced almost like “knife” and “naïve” is the two-syllable word for someone without experience.

Yeah, yeah, I know—we usually leave off the dieresis in English. Mainly, I think, because we don’t have easy access to the punctuated  letters on our keyboards. But at least now you know how they work when you see one.

In case you want to use a letter with a dieresis, here’s a handy little chart. Position the cursor where you want the letter to go, then hold down the Alt key while you type the numbers on the numeric keypad, then release the Alt key.