I refer to the modifier “sort of.” Here’s an example from a science type who wants to be chatty and informal:

I clearly remember Mrs. Clemens telling us in sixth grade that “sort of” was poor English—we should use “rather,” which would change that sentence to

Sounds a little bit stiff and formal. But even that “rather” is unnecessary! Try this on for size:

Says the same thing as the other sentences, doesn’t it? And it’s simpler, more direct, and has more punch.

Remember the rule about conciseness:

If you can leave out a word without changing the meaning, leave it out.

Over the years I’ve mentioned all four of these incorrect rules, both in the classroom and on this blog. Use the search box in the upper right to find several mentions of each bad rule.

What English language rules are incorrect?

Never split an infinitive
Never end a sentence with a preposition
Never use a double negative
The pronouns “them” and “they” are always plural, never singular

I had forgotten the source of these rules. I think he was mentioned once in my sophomore English class. But I have long known that these rules were bad. Anyway, here’s an essay from Quora on the subject. It was written by Franklin Veaux, published author and compulsive writer. Thank you, sir, for the reminder.

All four of these rules were made up by one person, Bishop Robert Lowth.

Lowth was a religious scholar who was obsessed with the “purity” and perfection of Latin. He had a big-time fetish for Latin grammar. He considered Latin the ideal language, and believed that English should be more like Latin.

In 1762, he published a book on English grammar that made up a whole bunch of new rules, including the four above. His sole rationale for many of these rules was simply to try to force English grammar to be closer to Latin grammar.

Those rules had never been part of English until he made them up, and outside of prescriptivist grammar taught in school, they never caught on. Today, English grammar experts have largely abandoned teaching any of them.

I ran into a sentence that’s easy to misunderstand even though it’s written “correctly.”

Ocean temperatures are also much less variable than surface temperatures, which can swing greatly from year to year, and therefore give a clearer signal of global warming.

What is the subject of “gives the clearer signal of global warming”? Is it surface temperatures or ocean temperatures? Put another way, what does the “therefore” refer to, the “swing greatly” or the “much less variable”?

“Surface temperatures” and “swing greatly” are both closer to the “therefore give,” so that’s what the clause should refer to, right? Nope!

I think the writer of this article, Nicholas Kusnetz, (and maybe his editor) are so familiar with the mechanics of the topic that they assumed the readers would already know that the more stable temperatures are better indicators of change.

They expected the readers to jump over two wrong answers to get to the correct reference, a serious mental jolt. Mental jolts are not good. The sentence should have ended:

… and therefore ocean temperatures give a clearer signal of global warming.

Now the reader can’t get it wrong. And that’s how you should write!

PS—I like to include pictures in this blog when I can, so here’s one from the article. Notice that it describes ocean temps, not air temps.: 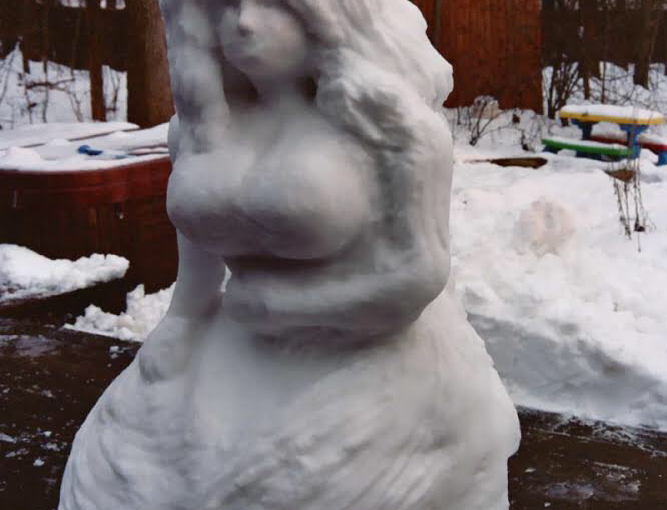 This has nothing to do with grammar or writing. Recently I got some interest in my wife’s snow sculpture of a mermaid, and I want to post it somewhere people can see it, so here it is.

In England they call it a Curriculum Vitae (pronounced “veetah”). In the US we call it a résumé, and that’s how it’s spelled. As in this comic, even though the guy has his priorities wrong:

“Resume” is when you start up again after stopping something. To get that accented “e,” hold down the Alt key while you type 0233 on the numeric keypad.

Also called “conciseness.” That’s the older (but still permitted) word up there in the title.

Anyway, the comic says it all: Take out unnecessary words!

I haven’t mentioned this in a while, maybe never: A certain reflexive pronoun is usually a pretentiousism. That word is myself.

Reflexive pronouns are for when you already mentioned the word earlier in the sentence, such as

We did it ourselves.
I baked the cake myself.
You can make your bed yourself.

About the only one people get wrong is “myself.” We don’t say, “Yourself can make the bed.” Here’s an example of how we do it wrong:

Remember Heathkits? The better part of 50 years ago the company had a store here in Maryland, which merited many pilgrimages from myself and my nerdy friends.

The better part of 50 years ago the company had a store here in Maryland, which merited many pilgrimages from meand my nerdy friends.

Don’t you be pretentious!

They aren’t expository writing! Even though people treat them as if they were. Headlines are marcom (marketing communications). We tech writers say that all marcom people are insane, and it’s true!

I’ve been meaning to write a post about headlines, and I ran into this comic on the subject , so here’s the post. First the comic:

Okay, here are several headlines on one topic in the rather uncontroversial field of astronomy:

The actual topic sentence should be something like “Astronomers have recently increased their precision regarding the movement of the Large Magellanic Cloud.”

We are not in danger—the event is more than a billion years from now. Are the headlines true? Well, they’re all about side issues, not the main topic. Literally true, perhaps, but misleading!

A lot of us read only headlines, and for every topic I’ve checked into— politics, energy, global warming, environment, economics, private lives of famous people, you name it—both sides (all sides?) frequently distort what’s going on either to get you to click, or to convince you of their position if you don’t read in depth.

We have four kinds of horizontal lines in English typography. Everybody knows about the hyphen; you even have two keys for it on your keyboard, the minus key, and up toward the right end of the top row of keys. Speaking of that key, the slightly longer horizontal line above the hyphen is, counterintuitively, the underscore character. (If you want the underscore under letters, you have to use the underscore font style, Ctrl-u in MS Word.)

You might or might not know about the other two horizontal lines, the N-dash and the M-dash. (Alt-0150 and Alt-0151 respectively. Hold down the Alt key while you type the digits on the numeric keypad.)

And here we come to the matter of style:

Don’t put spaces around your dashes.

Those spaces waste space. Here’s an otherwise good sentence with those bad spaces:

Yes, you can insert the spaces, but don’t.

PS— I just ran into an alternative to the M-dash in a place where I’m not used to seeing it: Professional writing. That alternative is two hyphens. Typing two hyphens is okay for casual writing, say, on a typewriter, but not in an ezine article. I suspect his editor was asleep n the job. Here’s the sentence:

Don’t do that, either.

First, look at the comic. It’s the second speech bubble.

Is the word a subject or an object? How else might you say that sentence?

The gal in the glasses is incorrect, using a pretentiousism. Maybe she takes after her mom, who also makes lots of mistakes.