Seems I can’t resist Darren Bell’s Candorville comics in which the protagonist, who is a writer, interrupts and corrects someone’s grammar. Here’s another one. I think I make this mistake myself sometimes. After all, can “read” have both an active and passive meaning?

Thank you, Kendra, for a good illustration of the problem.

I mentioned this solecism before, but comics about two versions of it appeared on the same day, so I thought I’d do a little combining. The first is Understanding Chaos. The comic is funny because it uses the word for measuring when they are counting. It’s fewer Gyms, guys.

And the next comic, Soup to Nutz, is also funny because he uses the word for measuring when he’s counting. It’s number of legs, kid.

Sigh. I wish the comics was the only place I ever saw this goof.

Nouns are one word, verbs are two words. —What???

Here’s what I mean. It’s part of a headline to an info security article.

Breaches don’t actually happen at the speed of light: Security firm CrowdStrike has determined that the average time to breakout is less than two hours.

What’s “breakout”? Here’s a definition, using “breakout” as an adjective (okay, a noun used attributively, but that’s another lesson):

The breakout time is the time that it takes for an attacker to escape the initial beachhead machine that they were able to compromise.

Here the word is a verb:

How long does it take to break out of the system?

Seeing that article reminded me that the habit of making nouns out of separable verbs is common in English. A common example of getting this wrong is misusing the words “login” and “log in.”:

Turnover in low-paying jobs tends to be high.
How often do you turn over in bed?

So remember, if you’re doing something, use two words.

Yes, English has other ways of relating verbs and nouns, but I’ll save that for later.

This article is about work as an illustrator, but it could just as well be about writing, any writing that has a deadline. Term paper, article, blog post, something your boss asks for, anything. I read the whole article and didn’t find anything grammatically remarkable (except, perhaps, the lack of errors), so I can’t even make that kind of comment as an excuse to post a link. Here’s the link. Go read the article.

The gist is that you should let people on your team know as soon as you do that you might not meet the deadline. But go read it. If I find a related comic before this post posts (I’m writing this about a month ahead of posting date), I’ll include it. But if you do anything on a deadline, read the article. 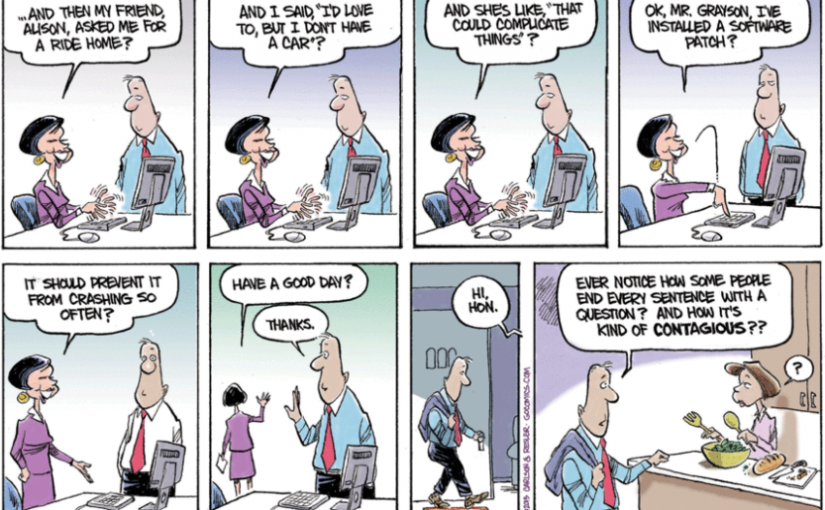 This isn’t about writing, but it’s still a good thing to know. Here’s the rule:

Drop the pitch of your voice when you stop saying something, even if what you’re saying is a question. You come across as stronger and more poised.

Gray Matters shows how not to do it: 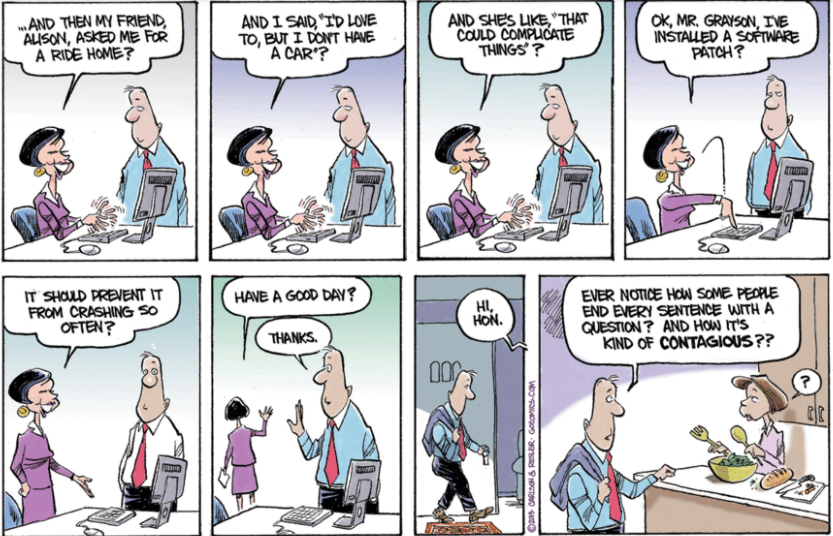 PS—I found someone who already knows this:

English doesn’t allow three of the same letters in a row. So Dagwood is wrong here. See the first panel:

But apostrophe-s is how you make a possessive, isn’t it? Yes, if the word you’re making possessive doesn’t already end in s. If it already ends in s, then all you need is the apostrophe. So it should be “boss’.” You still pronounce it “bosses.”

Okay, English has an exception to the no-three rule: onomatopoeic words. You can write hmmm and zoooom and buzzzz and noooo! and yasss? And so on.

This Lunar Baboon comic is a set of instructions. Instructions are common in technical writing.

Look at the second panel. He numbered the instruction. That’s good. But…

The rest is good, but I have a quibble. In the next-to-last panel he should have said, “…someone who enjoys…” but that’s for another lesson.

People get “comprise” correct so seldom, I have to post examples of getting it right whenever I see them.

Dubbed “Cabin by the Sea”, the single bedroom home is built around a central living cube, which not only comprises a kitchen, study and bathroom suites, but also separates the home into its separate quarters.

PS—I just ran into a post on Google+ where the writer used “comprise” correctly—twice! Here it is:

Comprising around 7500 coins and 1200 pieces of bullion, it is the largest known Viking hoard from Western Europe. … The hoard comprises a mixture of coins, ingots and hacksilver, mainly from Viking ruled parts of England with some from the Continent and the Islamic world too.

The post is about a museum exhibit in England. …the extensive Cuerdale Viking Hoard, ‘Vikings: Rediscover The Legend’ Exhibition, The Riverside Arts Centre Museum, Nottingham, 6.1.18.