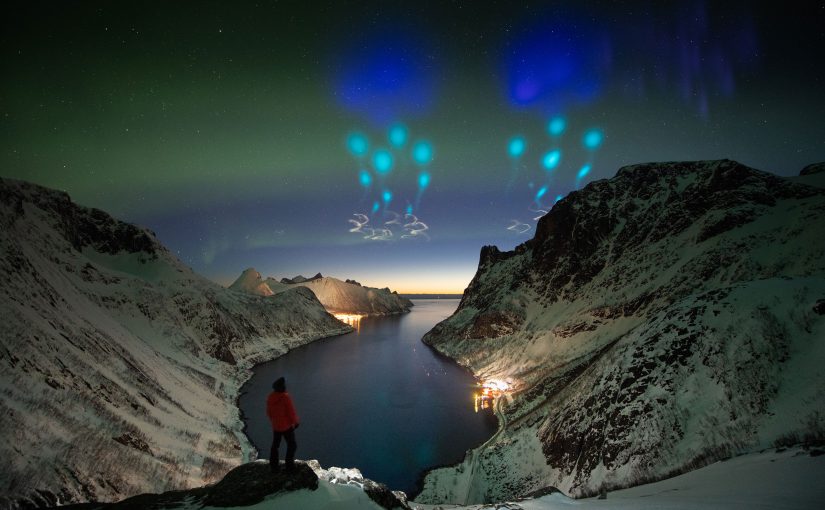 Sometimes, when you read a sentence with two modifiers or two antecedents, you can find it confusing to decide which modifier goes with which part of the sentence. Then you have to pause and figure out the most logical meaning. Take a look at this sentence:

The vapor trails were observed dispersing from several ground stations.

Lots of times you can solve the ambiguity by changing the order of part of the sentence.

The first three are all pretty awkward; the last one is the best, but it implies the existence of vapor trails that weren’t dispersing.

I’ve been cheating on you. Here’s the context:

The atmosphere over northern Norway appeared quite strange for about 30 minutes last Friday when colorful clouds, dots, and plumes suddenly appeared. The colors were actually created by the NASA-funded Auroral Zone Upwelling Rocket Experiment (AZURE) which dispersed gas tracers to probe winds in Earth’s upper atmosphere . AZURE’s tracers originated from two short-lived sounding rockets launched from the Andya Space Center in Norway. The harmless gases, trimethylaluminum and a barium / strontium mixture, were released into the ionosphere at altitudes of 115 and 250 km. The vapor trails were observed dispersing from several ground stations.

Since the context tells so much about the vapor trails, you don’t need to describe them again in the last sentence. Just add the new information; say this:

The vapor trails were observed from several ground stations.

And here’s a picture: