The other day I wrote about alliteration, so let’s take a look at another figure of speech, onomatopoeia, pronounced ah-nah-ma-ta-PEE-a. It’s from the Greek, meaning literally, “doing the name.” As you no doubt remember from seventh grade English (Hi, Miss Austin!) it means “a word that sounds like what it means.” Or is supposed to, anyway. Words like “peep,” “woof,” and “moo.” A lot of these words don’t actually sound like what they say they sound like. Ever listen to an actual rooster? It doesn’t really sound like “cock-a-doodle-do.” What about “bang,” “crash,” and “pow”? And the French word for the sound of a dog barking is pronounced something like “ngaf,” or so I’m told. Sometimes we don’t have a word for some sounds, a problem comic artists deal with often. For example, what sound does a rake on concrete make? Here’s a panel from Terri Libenson’s Pajama Diaries. Or what about the sound of a subterranean critter, maybe a Bobbit Worm, being eaten? The Edge of Adventure, by James Allen and Brice Vorderbrug, has something to say about that: 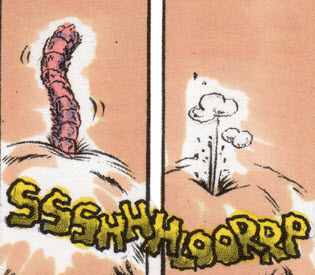 Well, those aren’t likely to end up in the OED, but here’s a good commentary on the subject. Thanks, David Malki, of Wondermark: 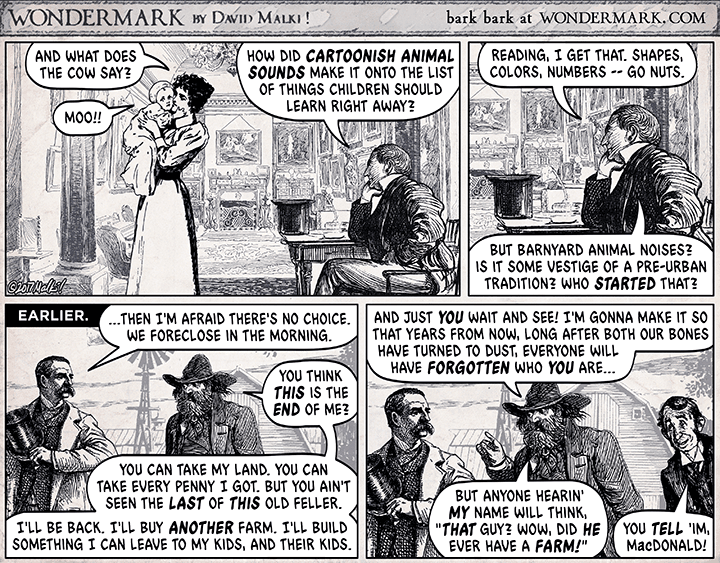 I think you should feel free to make up your own onomatopoetic words. If you think up a good one, share it in the comments.