My peevishness is aroused when people use transitive verbs as if they were intransitive, particularly “display” and “complete.”

Back to jargon: That word “something” is called a direct object, and transitive verbs always have one. Intransitive verbs don’t have to have one: you can think, you can suppose, you can walk, you can appear or disappear (in a puff of smoke, perhaps), all without having to put something after them. That’s intransitive.

Here’s an article where they (The National Oceanography Centre in the UK) do it wrong in the headline, then do it right in the article (with a different verb, but you get the point):

The first COMICS expedition reached a conclusion just before Christmas, having collected a great data set on biological carbon in the Ocean’s twilight zone.

I suppose we grammar curmudgeons will have to get used to this solecism, especially the one with “display,” because computer instructions are so common. But when you press Enter, the window doesn’t display, it appears!

Priority is when something has to come first because of importance or its place in a series of steps. For example, “my wife has a prior claim on my affections.”

If all you mean is earlier of before, say that. Here’s an example of this misuse of prior. Two, actually:

All they mean is earlier. I’m pretty sure these folks aren’t suggesting that the earlier literature and work are more important or ought to be read first.

Should I also mention their misuse of “which” when they should use “that”?  Nah, I already covered that.

Academics can be so pretentious. Harrumph.

My pet peeve for today, class, it the phrase “glossary of terms.”

I like the strip Pajama Diaries. Once a month, though, Terri Libenson makes me cringe with her once-a-month series of that title. Here’s the latest:

If you care to see the whole series, here’s a link to them all. I think.

And “glossary” all by itself is just fine. Harrumpf.

PS: Did you notice that I repeated myself in that sentence just ahead of the comic? I don’t normally do that (it’s redundant), but it was a good chance to use the phrase “once a month” both as a compound adjective, and not. 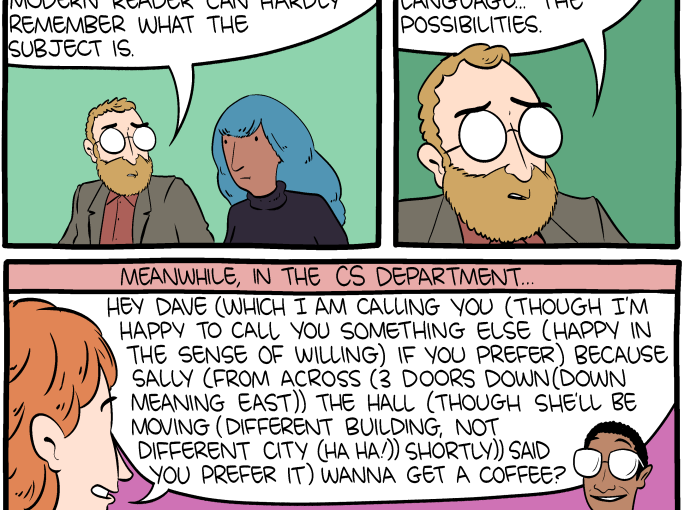 We read! (Okay, we talked, and played music, too.) And since the language itself was a large part of the entertainment, and we had the time to reflect on what we read, the writing could afford to be rather more complicated (or tedious) than we’re willing to tolerate in our faster-paced world.

When I started reading this comic, I figured I’d go get my copy of Milton and quote a few sentences as examples, but I see I don’t need to to give you the idea. Besides, I quoted some other elderly English several posts back. 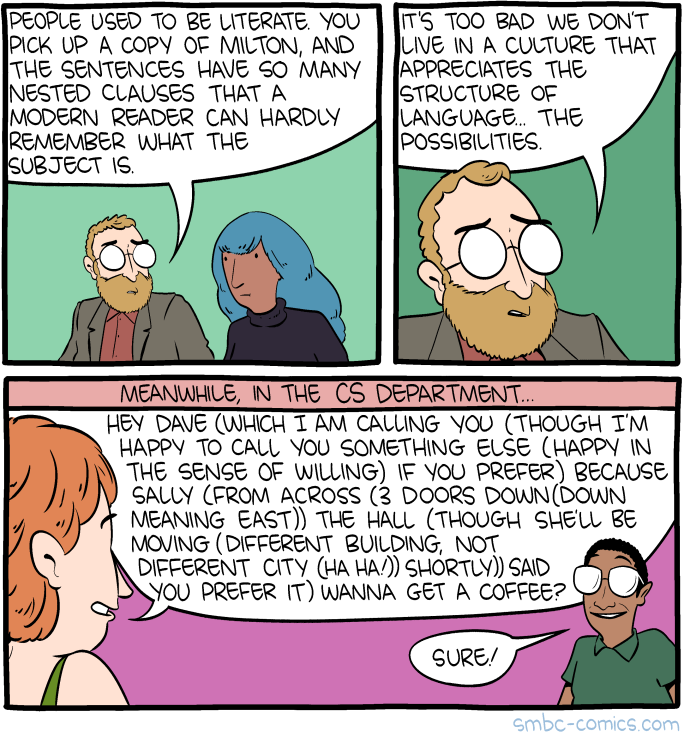 Wanna try your hand at a sentence like that?

Seems everybody is gloomy and pessimistic about the state of our culture. I first ran into this poem more than 50 years ago. (I suppose I ought to add a verse of my own, eh?) I ran into a couple variations of it; I think it dates to the early 1900’s. Okay, I thought about it. The first two lines are mine. (My grandad was president of the National Livestock Exchange.)

So don’t give up!

Many people write perfectly grammatical sentences that aren’t very good. Unnecessary words, modifiers out of place, that sort of thing. Here’s a (ahem) good example. Look at the item about the pencil:

Believe it or Not has long been a favorite of mine, and I don’t often find solecisms in it. This sentence has two!

The metal sleeve on a pencil, which holds the eraser, is called the ferrule

Well, according to Perry Bible Fellowship, the Orca thinks not…

Unless the cartoonist is suggesting that reality is more important than spelling. On closer examination I see the Orca got the whole group of penguins, not just the lecturer. Hmm.

Two comics about spelling in one day! How can I resist???

By the way, don’t trust your spell checker a whole lot.

I am sick, but I don’t think I’m contagious.

We think of contagiousness as going with sickness, so the sentence uses “but” to contradict this usual circumstance.

If I may digress a bit, I attended a sales class once in which the instructor said to avoid using but, because it’s negative.

Hmm. Try getting rid of some buts and see how it feels. (It feels funny, but/and interesting.)

And that leads to my intended object lesson for this post, compliments of Curtis, which hinges on the kid ignoring the implied contradiction between corniness and the feeling of love in his dad’s statement, which definitely needs the but.

The lesson: Pay attention to your buts.

I see this goof often enough that I think we’re going to lose this battle, (but if you write anything the least bit expository (you know—when you explain something (which this blog is about, after all))) you should use the correct word, regardless of what everybody else does. (Okay, I could have written a less convoluted sentence there, but I thought it would be fun to nest a couple parentheses.)

Anyway, the bad word is nauseous. At least it is when you mean nauseated.

Don’t be nauseous to us who know better! We don’t like to feel nauseated!

The most common type of persons who make this mistake are ones who want to be formal, but don’t know how to do it right, so they do it wrong, and end up being pretentious instead of formal.

Don’t write “as per”!!! It’s wrong! It’s a pretentiousism. Harrumpf.

Here’s the comic. Comics are a good place for this poor grammar, and it fits rather well into this guy’s persona.

He had so many ways to say this correctly: according to, in line with, as we traditionally do, as usual; even just end the sentence after “Thanksgiving.”